Heading into Halloween, I decided to write about something really scary – exploding sunroofs. Yes, that is actually a thing. It’s not just an urban legend. It really does happen, all over the world, on many different make and model vehicles. A few months ago, it happened to a friend of mine, right here in North Carolina. 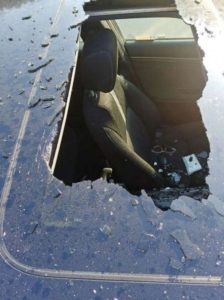 She was driving down the freeway in her Honda CR-V when she heard a loud explosion, like a tire blowing out. Glass rained down on her head, scaring her half to death. She immediately got off the freeway and saw that her sunroof had, in fact, EXPLODED. All she could think (other that WTF!?!) was how grateful she was that her two small children were not in the car when it happened.

While spontaneous combustion of sunroofs does not happen as frequently as tire blowouts, it still presents a real safety hazard. What’s worse is that the automakers do not even acknowledge that there is a problem despite the fact that over 1000 formal complaints have been filed with the US government. A quick perusal of internet bulletin boards shows that actual occurrences of this phenomenon may be 10 times higher than the reported numbers.

Why do sunroofs explode?

So, why does this happen? It’s not a weather-related issue, since sunroofs have exploded in warm climates as much as in cold ones. It’s not an age problem either, as most of the incidents have occurred within the first 2 years of the car’s life. The National Highway Traffic Safety Administration has an ongoing investigation into the problem, but no definitive cause has been identified.

However, there are some suspicious correlations. The majority of exploding sunroof incidents have been reported in past 6-7 years, as sunroofs have started to get BIGGER. On many vehicles today, nearly the entire roof is made of glass. Even with the type of tempered glass used in sunroofs, the larger the pane of glass, the harder it is to ensure that it won’t shatter. Furthermore, much of this glass is coated to create darker areas that hide the mechanical parts that operate the sunroof. The coating process makes the glass weaker and more vulnerable to shattering.

Unfortunately, safety standards for sunroofs have not kept pace with the design and implementation in the automotive industry. This lack of regulatory oversight leaves automakers free to continuing ignoring the problem because they don’t want to spend the money to do the research and fix it.

Who pays for it?

Fortunately, no one has been seriously injured (that has been reported), but exploding sunroofs have cost consumers thousands of dollars. Because the automakers deny that their sunroofs randomly go blooey, they refuse to fix them under warranty. The dealerships claim that it must have been a “rock” or other “projectile” that hit the top of the car and tell customers to call their insurance company. But the insurance companies look at the broken glass and clearly see that the jagged edges point UPWARDS, not downwards as would be the case if something hit the roof from above. They say it’s a warranty issue and deny the claim. So, amid the all of finger pointing, the poor vehicle owner is left bearing the repair costs.

As a result, several US law firms have filed class action lawsuits against various automakers over exploding sunroofs, seeking reimbursement for the repair costs the victims of these blowupity sunroofs have incurred. The law firms are also pressuring the NHTSA to issue a safety recall on these vehicles to force the auto makers to get off their penny-pinching butts and actually do something about it. I’m not holding my breath.